This is not a magic show is a performance of and about sleight-of-hand magic: its invisible mechanics, its clichés, and what it tells us about live theatre and make- believe. In a conversational yet crafted approach, Vincent Gambini presents astonishing close-up magic that invites us to question how enchantment and wonder are produced within a theatrical situation.

Possibly the first of its kind, Vincent Gambini’s This is not a magic show is part performance-lecture, part deconstructed showbiz, and part magic tricks that leave you, like, omg.

When still a teen Vincent won 1st prize at the Italian Close-up Magic competition, and 2nd prize at the International competition in London. In 2001 he gained entry to the Magic Circle by writing a thesis called ‘Deconstructing Magic’ which, as a title, does a good job at describing his show. In his spare time he writes and makes performance art under the pseudonym Augusto Corrieri.

A gentle, cerebral show in which Gambini unpicks both his tricks and our expectations… a tightly constructed piece of performances

This thoughtful, playful and multi-layered piece will make you question how we watch and what we see 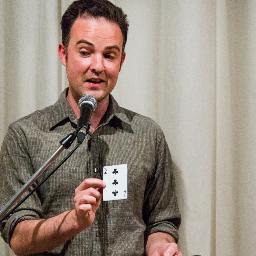