“On the 29th of July 2011 Masculine Expressions of my Creative Prowess came to me as the title for a potential show. I thought the process should somehow involve talking to men. I made a note of it. Nothing happened. It has rained a lot since then: I’ve hit 31, I’m most definitely beginning to go bald, and I’ve lost my central father figure to cancer. I’m still trying to figure out how I fit into the category ‘man’, and have begun to talk to men about it. I still don’t know what the show is about, but I’ve decided to start making it anyway” – September 2014

We’ve had to put up with it all, from boys don’t cry to grow some balls. Enough! What hides beneath the monolithic notion of ‘masculinity’? What is it (or should feel like) to be a man? Pablo is still trying to figure it out.

Masculine Expressions of my Creative Prowess is an ongoing live art project interrogating and undermining heteronormative notions of what it is (or should feel like) to be a man, and what a man is meant to be. It explores the plurality hidden beneath the monolithic notion of ‘masculinity’, addressing the interplay between conventionally oppositional concepts: hard/soft, tender/brutal, humorous/serious, plaintive/celebratory… To date, the project has had six different ‘outings’ from club nights and pubs, to theatres and galleries. 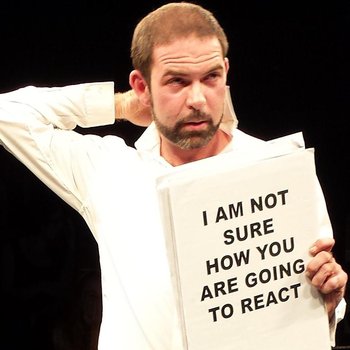