Join The Family Jewels for a full-frontal night of comedy, song, lipsync and a disarmingly sexy exploration of gendered power. MANdemonium charts the heady glory days and spectacular decline of planet Earth’s men, through the medium of cabaret.

Welcome to the year 3020. After centuries of feminist onslaught, the Gender Wars are over, and the epidemic of toxic masculinity has finally been controlled. The internet trolls were right along: men really were under attack. Now, they’ve been banned.

It may be hard to believe, but the world wasn’t always a feminist utopia. 1000 years ago, men roamed the streets free and unshackled. Behold, the 31st Century’s last remaining specimens of manhood* - live and in the flesh, revealing a snapshot of machismo in its final days.

From bro bonding, to the mating tactics of the millennial man, expect a fascinating glimpse of the last hurrah of these endangered species.

Starring The Family Jewels drag kings: Beau Jangles, Dan Load, Dickie Martin, Raymond, and Sir.
*All speciMEN will be kept secure and remain under the supervision of trained professionals. Please keep your hands and feet inside the designated seating areas, and for your own safety, do NOT touch the men.

Content Notice: The performance depicts a comic imagining of a future in which men have become extinct because masculinity has been deemed toxic and outlawed by femme supremacists. Through the medium of cabaret acts the performers explore different aspects of 20th century masculinity, this sometimes involves partial nudity and sexual references. 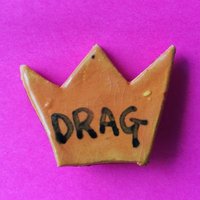