Lyn Gardner
24 January 2019  ·  Follow on Stagedoor
“I can't get to Jennifer Tang's show this week because I'm tied up at the Vault Festival. But I really like the sound of this autobiographical piece about being born to Cantonese parents but raised by a white British family. Touching on identity, how upbringing shapes us and dual heritage in contemporary Britain, it should be distinctively different. If you catch it, do leave a review on the app. I'd be interest to read what you think!”

A woman was going to take another woman’s baby.
She thought she was getting a chow mein and instead she got a baby.
Six months later
From the top floor of a hospital
Wrapped in blankets and snuggled away
A woman called Janice and a man called Phil
Took home a baby girl.
Me.

Based on the personal story of theatre-maker Jennifer Tang, who was born to Cantonese parents but raised by a white British family, this touching and highly theatrical new show asks what it really means to be British and Chinese in contemporary England, and how family, love and belonging all shape who and what we are.

It’s so good to hear Cantonese onstage. So good. It reaches inside me and makes me clench my fists – but to just have that onstage, to just have the bodies onstage that look like my own isn’t really enough anymore

All over in an hour, full of ideas, energy and imagination, Ghost Girl // Gwei Mui 鬼妹 is a terrific, thought-provoking show 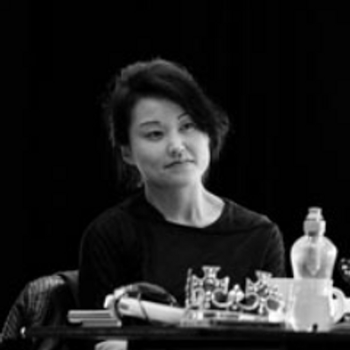