Freedom of Expresso is the new show from Spoken Word satirist Norman aka the Dapper Rapper. It promises to explore many of the hot topics of our turbulent times - Free Speech, Fake News, Real Life and Freedom of Expression. As Norman always observes: "Anyone who says they don't agree with Free Speech should be locked up."
Norman Dapper Rapper is the alter-ego of one time comedy writer Nelson David. His credits include writing for Spitting Image, Rory Bremner, Radio 4's legendary Week Ending, Radio 1's Zoe Ball Breakfast Show and many more.
Nelson was also once a stalwart of the Improvised comedy scene where he performed in his own group (Unexpected Human in Bagging Area) and also alongside the likes of Steve Frost and Jeremy Hardy 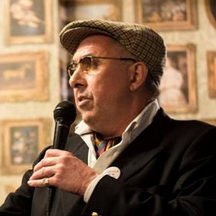 Norman the Dapper Rapper
Previous Next