A space adventure, drifting in the expanse between theatre and comedy, it follows two identical clones who waken a spaceship full of others (the audience). They set about recreating the scene of their birth, recounting the long, dark history of the spaceship in which they are bound for eternity, and trying to impersonate the enigmatic billionaire entrepreneur Don Solus, from whom they all originated.

Occasionally poignant, often dark but mainly silly, Clonely is a mixture of theatre, sketch comedy and audience interaction that blends into a surreal and anarchic hour. Me Me Me poke fun at the avant garde, the science fiction genre and themselves all whilst engaging the audience in singing, balloons, and Oreos.

Chatfield and Hammond are gifted physical comedians, conveying multitudes with a fixed grin and a flick of the eyes… A glorious success. 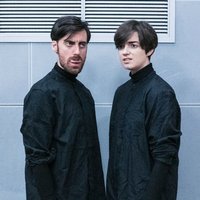