In her one-woman show, Celebrity Bound, an actress-turned-artist grapples with her own desire and disgust for fame. Movement, scripted and improvised text, video, and interactive media shape a complex and personal narrative that moves between comedy, satire, brutal honesty, fantasy, heartbreak, and hope. It is also interactive. She works with the audience to achieve a single goal – to become a star.

The quest is very real and performed in real time. Tactics include finding a publicist, scoring a celebrity tweet, and securing another booking by pooling resources and contacts from the audience, all the while challenging the audience’s role as celebrity spectator/creator.

Celebrity Bound begins with a barrage of iconic celebrity gestures, punctuated by a confessional, in which the artist lists the high-reaching goals she failed to achieve by certain ages in her life. She then tries to become famous with the help of the audience, web searches, and the godlike authority of Apple’s Siri. But the piece turns – exposing the personal yet universal drive for becoming “more” than one’s familiar self. Over the course of 75 minutes, the piece deconstructs the gestures and rhetoric that go into producing fame, using the likes of Oprah Winfrey, Lady Gaga, Marina Abramović, and many others as inspiration. 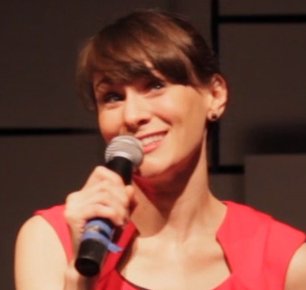