A show about being a woman and a top bloke. And throwing a stag do in 60 minutes. Worth a punt? Hopefully. Oi oi! Welcome to the stag!

"Tears up notions of gender like a discarded kebab wrapper" - Makers.com

Nominated for the BBC New Comedy Awards 2014 & 2016. Developed as part of Soho Theatre Comedy Lab. As heard on BBC Radio 2 and 4Extra. 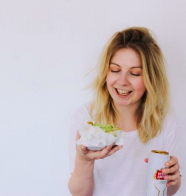