Lyn Gardner
15 September 2021  ·  Follow on Stagedoor
“One of this Autumn’s returnees to the West End, Matilda (Cambridge Theatre) is very welcome. I just love this show: its energy, its wit and its celebration of the idea that you can re-write your own story against all the odds. Dennis Kelly and Tim Minchin’s musical actually improves on Roald Dahl’s original story without losing any of the grotesque. Funny and tender in equal measure. A real little miracle.”

Best of the West End
2 December 2021  ·  Follow on Stagedoor
“If you are looking for a family musical on the West End, this one is top of the class. Tim Minchin and Dennis Kelly actually improve on Roald Dahl’s original by giving the little girl at the centre of the story real agency and a chance to change her own story. The music and lyrics are intricate and witty, the design is ingenious, the characterisations are bold and the whole thing has plenty of heart under all of the fizz.”

Matilda The Musical is the multi-award winning musical from the Royal Shakespeare Company, inspired by the beloved book by the incomparable Roald Dahl.

With book by Dennis Kelly and original songs by Tim Minchin, this is the story of an extraordinary little girl who, armed with a vivid imagination and a sharp mind, dares to take a stand and change her own destiny.

Winner of seven Olivier Awards and over 90 international awards, including 23 for Best Musical, Matilda continues to delight audiences at London’s Cambridge Theatre.

Matilda the Musical is the multi-award-winning musical inspired by the much-loved book by Roald Dahl, produced by the Royal Shakespeare Company, with book by Dennis Kelly and original songs by Tim Minchin. Matilda The Musical tells the story of brave Matilda, the little girl that discovers magical means to deal with her difficult family and troublesome teachers.

Life at home is boring and frustrating as Matilda’s parents are more interested in what’s on TV than her. School is no fun either, dealing with horrible headteacher Miss Trunchbull who wants to make everyone miserable. Supported by her teacher, the kind Miss Honey, clever Matilda discovers she has special powers and decides to turn the tables on the grown-ups to teach them a lesson!

It’s an unmissable evening of family fun rooting for naughty Matilda. You can book your Matilda the Musical ticket for London’s Cambridge Theatre, in the heart of the West End and know it comes highly recommended by audiences and critics alike. Matilda transferred to the Cambridge Theatre in the West End following a sell-out run in Stratford-Upon-Avon and has been a firm favourite on the London stage ever since. Matilda received five prestigious Olivier Awards in 2012, including Best Actress in a Musical for all four girls playing Matilda.

Matilda the Musical has music and lyrics by comic genius Tim Minchin and book by Dennis Kelly. Produced by the Royal Shakespeare Company, Matilda London is developed and directed by Matthew Warchus. Choreography is by Peter Darling and set and costume design by Rob Howell, sound design is Simon Baker, orchestrations and additional music are created by Christopher Nightingale.

Matilda tickets are Up for Grabs Now!

Get your tickets for the award-winning Matilda the Musical, the feelgood and funny London show that’s a magical delight for all ages. You’ll not want to miss this chance to bring a smile to your family’s faces.

Easily the standout musical of the decade

An absolute cracker of a show, bursting with dynamism, fizzing with verve.

Smart, quirky and sublimely good fun. A moving and subtle spectacle which will have kids in stitches and adults in tears. It is guaranteed to delight anyone who’s ever been a child. I can’t wait to see it again.

The quest for a great new musical is over.

An evening of unadulterated bliss. 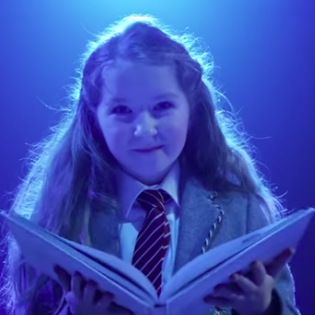 Dennis Kelly: "Just the idea of this play in the wrong hands makes me anxious.”