Lyn Gardner
13 February 2020  ·  Follow on Stagedoor
“Battersea Arts Centre’s artistic director, Tarek Iskander, says that this show, made by a bunch of young Brazilians who occupied their high schools in 2015, was the best show he saw last year. That’s why he programmed it in his first season at BAC. I reckon you should take note of his recommendation. The season has already produced the textured and touching Autoreverse, and will continue with dreamthinkspeak and Access All Areas’ intriguing sounding UnReal City but I suggest you get in quick and grab some tickets for this piece that has gathered garlands while touring internationally and which takes the form of both a party and a protest which envelops the entire audience.”

When It Breaks It Burns is an intervention, a cry, a fight.

In 2015, sixteen lives were changed forever when they occupied their high schools, as part of protests that happened across Brazil. Now, they occupy this space using dance, live music and performance to tell their extraordinary story.

Get up close to the action as real life invades the stage. When It Breaks It Burns envelops the audience in a party, a protest and an uprising.

This is not a story: this is real

An inspiring and exciting combination of dance, music, and audience intimacy 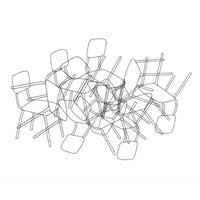