Something Dark tells the story of Lemn Sissay's upbringing in children's homes and foster care, and the search for his family and true identity. Originally directed by John McGrath (National Theatre of Wales), it has been performed throughout the world to critical acclaim. It was adapted for BBC Radio 3 in 2005, and the following Q&A sessions have become legendary.

An extraordinary true story, told by a masterful performer.

It would be impossible to come away from this show unmoved and uninspired.

The sheer intimacy of poet Lemn Sissay's performance underpins the power of this monologue. 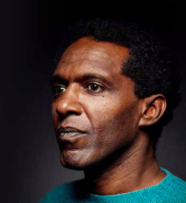