Bilal Zafar is a stand up comedian, writer and actor. He was nominated for Best Newcomer for his debut show; CAKES at the Edinburgh Fringe in 2016. He returned to the Fringe in 2017 with a sell-out run of his follow up show; BISCUIT. He has appeared on BBC3, Channel 4, Channel 5, BBC iPlayer, BBC Radio 4, BBC Radio 5 Live, BBC Asian Network, and has written for The Independent and The Guardian.

Flo & Joan are a British musical comedy duo, and sisters, Nicola and Rosie Dempsey. The piano/percussion pair have played to sold-out audiences across North America and the UK and have appeared on Canadian TV comedy programme This House Has 22 Minutes, BBC Radio 4’s Fresh From the Fringe and The Now Show. They are returning to the Edinburgh Festival this year following a sold-out run of their 2017 show The Kindness of Stranglers and their 2016 show Victory Flaps, which was nominated as one of the top 10 shows of the festival in the Amused Moose Comedy Awards. 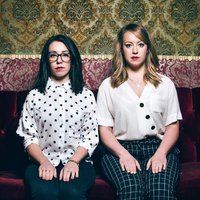