There are dark spots and blanks in her memory now. Yet in paying tribute to the family, friends and performers who have inspired and kept her company over the years, she reflects on what is lost and equally celebrates the space left behind for new insight.

Supported by video monitors, a green screen and her virtual back-up band, Shaw talks, croons and imitates her way through a solo show confronting identity and change. Autobiographical anecdotes and filmed images are matched by tongue-in-cheek song renditions, with ‘The Hokey Cokey’ tweaked to inform us about the signs of spotting a stroke. Sometimes sombre, sometimes frisky, this is a stand-up routine that’s ‘admirably unsentimental and often very funny indeed’ (New York Times). Led by Shaw and Lois Weaver, New York-based duo Split Britches has transformed the queer performance scene with satirical gender-bending work.

Leaves you in heartfelt thrall to her admissions of vulnerability, and glorious, uproarious denial of it 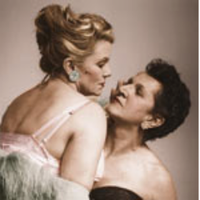