Enter an inflatable universe for a tale of creation and destruction in which the epic and everyday, mythic and mundane coexist – and for which binaural sound design and visuals are used to ingenious effect.

Adam and Eve join an insecure God in a dark paradise, as He creates the world hoping for a little worship. But when temptation takes over, man and woman are expelled into a timeless landscape before this story of immense vulnerability, of tenderness and redemption, resumes in more familiar terrain.

One of the most exciting and urgent companies in contemporary theatre today, Australia’s Back to Back is driven by an ensemble of actors with intellectual disabilities who are co-authors and performers of the work. Lady Eats Apple is a large-scale, experiential production that exposes us to the fragility of existence while challenging the assumptions we hold about others and ourselves. ‘Engaging and disarming,’ says Australian Stage.

Part of our 2018 Season, The Art of Change, which explores how artists respond to, reflect and can potentially effect change in the social and political landscape. Find out more here.

Part of LIFT 2018, a London-wide festival of international performance taking place throughout June

Pushing and transforming our expectations of what theatre can be. 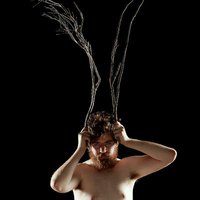