Six humble dwellings sit in a wild forest clearing. At first, we see only their exteriors. But when a live camera crew emerges, surreal, peculiar and humorous slices of life are captured and revealed on a big screen. From the mundane to intimate, sinister to absurd, a symphony of symbolic and unsettling images are served up, making us voyeurs of these atmospheric vignettes.

Young Belgian theatre collective FC Bergman are experimental and daring in their approach, devising visual and poetic work with an anarchist edge. The story of Noah’s Ark – the title alludes to the vessel’s dimensions – is the starting point for this production, which touches upon hidden desires, the search for life’s meaning, the beauty of human failure and, finally, hope. With a cast of thirteen actors, 300 el x 50 el x 30 el unfolds to a soundtrack that includes Vivaldi, The Persuasions and Nina Simone. 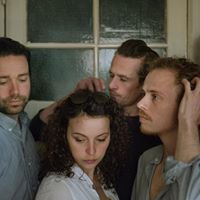