Featuring saxophone (Ollie), cello (Erica), keyboards (Bob) and cajon (Jake) their music ranges from Gershwin to Miles Davis and Joe Zawinul. Their current arrangements include Van Heusen's Come Fly with Me, Miles Davis' Blue and Green, Piazolla's Libertango, Bach's Prelude in C major, and Pachelbel's Canon. They love playing at festivals, fringe events, garden gigs, weddings, on local radio and making recordings. Inside3: Three voices, one sound. A trio, (guitar - Gerard, keys - Rupert and cajon - Sarah), playing a surprisingly wide range of covers and styles from Bruno Mars to The Isley Brothers, Clean Bandit to ELO and everything else in between! Formed in 2015 and based in Tooting, Inside3 plays weddings, pubs, intimate venues and parties and prides itself on its versatility and vocal harmonies. If you’re looking for something to get you moving on a Sunday afternoon, come and join us! 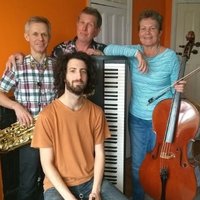