Streamdoor 😍
20 March 2020  ·  Follow on Stagedoor
“Clown Funeral was one of New Diorama’s Graduate Companies in 2016. Their adaption of Luke Kennard’s darkly comic poem of the same name follows the relationship of a Carer and a Murderer in a world where citizens rehabilitate criminals in their own homes rather than relying on state institutions.”

‘I have a murderer in my house. It’s all perfectly fine.’

In a world where citizens rehabilitate criminals, the Carer and the Murderer go for coffee and play badminton. Clown Funeral’s adaptation of Luke Kennard’s darkly comic poem tells the story of their unusual relationship, questions how easily we can forgive someone and asks to what extent our obsessions can consume us.

Using an electrifying style that blends surreal humour, subtle physical theatre and Noir-inspired scenes, Clown Funeral vividly bring the bizarre world of the poem to life. With a rolling cast portraying the characters of the Carer, the Murderer and Everyone Else, this unconventional three-hander poses difficult questions about morality, preconceptions and care in a uniquely offbeat voice.

Credit to Rachel Elfassy-Bitoun for the videography and editing.

Thank you to Luke Kennard for granting us permission to use the original poem, 'The Murderer', as a text for adaptation to stage. 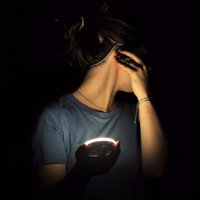