Lyn Gardner
29 June 2020  ·  Follow on Stagedoor
“The latest digital offering from Fuel, Sound and Fury’s Charlie Ward takes you into the pain-addled – and possibly morphine-dulled – mind of a young soldier called Harry, who is being treated in a makeshift hospital behind the front line during the first world war. Such patients were sometimes entertained by Charlie Chaplin movies, projected on to the ward ceiling so that the immobile wounded could watch from their beds. This version, designed to be experienced by one person at a time lying in a quiet darkened room, uses Sound and Fury’s immersive sound design (wear headphones) and footage from Charlie Chaplin’s By the Sea to create a theatrical installation in your own home that takes you into the mind of a young soldier and his hallucinatory journey into no-man’s land. I saw it back in 2014 and I’ve never forgotten it.”

Streamdoor 😍
29 June 2020  ·  Follow on Stagedoor
“An intimate, immersive, and powerful piece that places you as a patient at the heart of a wartime hospital, where this unusual therapy brings solace and comfort to those injured on the battlefield.”

C Ward, 1914. In a makeshift hospital, behind the front line, the war’s first casualties are treated. To boost morale, medical staff arrange for a Chaplin film to be shown for the bedridden, with the ward’s ceiling serving as the silver screen.

For one soldier, Harry, the flickering images, whirring projector, and Chaplin’s perfect comic timing trigger complex emotions and memories. Transported from the trenches to childhood, from trauma to dreams, the experience sets him on a journey into a personal no man’s land.

During the COVID-19 crisis theatre companies have been trying to find new and safe ways to present their work.

First staged in a makeshift hospital tent with beds for an audience of ten people with immersive surround sound, Sound&Fury’s Charlie Ward has been reimagined for 2020 so it can be presented as a theatrical installation in your own home.

Using Sound&Fury’s distinctive style, immersive sound design, and footage from Charlie Chaplin’s By the Sea, the extraordinary experience of being on Charlie Ward is conjured for our audience. 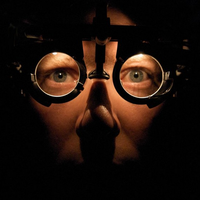