A whole new production of the hugely successful Horrible Histories series is to come back to London for another hilariously horrible run. The Best of Barmy Britain sees the best and most grizzly bits of the previous shows combined to create one revolting romp through Britain’s history. Celebrating five years on the West End, The Best of Barmy Britain opens at the Apollo Theatre London on August 5th.

Directed by and starring Neal Foster, The Best of Barmy Britain takes us through the most pivotal points in British history, as we encounter boisterous Boudicca, cowardly King John, hot-headed Henry VIII, devilish Dick Turpin and the groovy, dancing Queen Victoria! An unusual depiction of the country’s most notable moments, the grizzly parts are also kept in, as we are engulfed in the Great Fire of London and Guy Fawkes’ Gun Powder plot!

The Best of Barmy Britain is part of the highly acclaimed Horrible Histories series, penned by Terry Deary. With over 50 titles available, the books have sold over 25 million copies across 40 countries, educating children with its gruesome, grizzly tales. Produced by the Birmingham Stage Company, the stage adaptations of Horrible Histories have toured for over eleven years, entertaining audiences across the UK and Ireland, as well as Dubai, Hong Kong, Singapore and Australia! 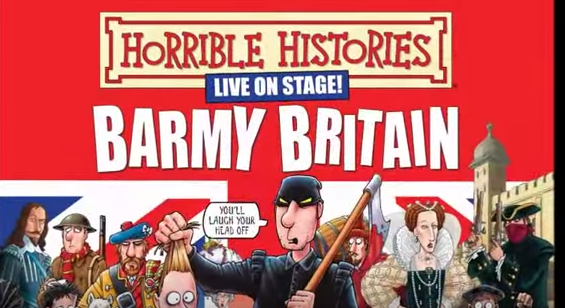