Back to the Future the musical is one of the newest and hottest musicals in London's West End. Don't miss out on tickets to this time-travelling adventure as it soars into the Adelphi Theatre, with spectacular songs, tense action, and spell-binding special effects that make that legendary car actually fly.

London's critics showered this hit production with warm reviews: the Evening Standard called it "enormous fun" while The Guardian reckoned that "the car's the star", saving praise for the show's replica DeLorean.

Back to the Future the Musical follows Marty McFly, a normal 80s teenage boy in a normal American town who just so happens to be friends with mad scientist Dr Emmett Brown. He takes a spin in Dr Emmett Brown's flying car and finds himself transported way back into the past, to 1955, when his parents first met. Suddenly, he finds that he has to help them fall in love, otherwise he'll disappear out of history altogether.

Back to the Future the Musical brings this story to life in the West End with rock'n'roll inspired songs and plenty of silliness. Bob Gale, who wrote the original 1985 movie this show is based on, wrote the book, alongside new music and lyrics by Emmy and Grammy Award-winning Alan Silvestri and six-time Grammy Award-winning Glen Ballard. There are also classic songs from the 1980s and 1950s included in the show, like 'Johnny B Goode' and 'The Power of Love', for maximum authentic retro atmosphere. The Back to the Future musical is directed by Tony Award-winning director John Rando (Urinetown, On The Town).

Don't miss out on tickets to this hit musical: there's a lot of wizardry going on behind the scenes to make sure it looks as good as it sounds. Back to the Future is a night out you'll want to rewind the clock on and relive, again and again.

Back to the Future tickets

To time-travel is easy, all you need is one DeLorean, a brilliant, but absent minded scientist and an eighties teenager who sometimes goes by the name Calvin Klein. If that sounds familiar then you’ll be glad to know that the hotly-anticipated musical Back to the Future has finally landed in London. To be totally transported in time and space is even simpler, get yourself Back to the Future tickets and discover that a brilliant evening of fun and musical comedy has flown by in the blink of an eye. Taking the evergreen family favourite 1985 film directed by Robert Zemeckis featuring Michael J. Fox and Christopher Llyod as its basis, Back to the Future the musical brings all the wit, thrills and spills of its on screen inspiration, but with even more music, and special effects live and in the flesh. Be assured it’s Johnny B. Goode indeed!

Audiences love it saying ‘Amazing show - so impressed by the actors & the set! Blown away by the whole show!’ ‘It was a fantastic show !!!! I would recommend it to any Back To the Future fan’. Critics agree, The Telegraph ‘The car's the star in this feelgood triumph’. ‘A near-seamless slice of escapist entertainment. Even the time machine’s a triumph in this larky musical version of the 1985 cult movie classic’ says the Evening Standard.

Back to the Future, London

Winner of Best New Musical 2022, Back to the Future is at the Adelphi Theatre London. Bringing in musical classics such as ‘The Power of Love’ the time-travelling musical adventure tells the tale of small-town American high-school teen Marty McFly, who is accidentally transported back in time from 1985 to 1955, thanks to a mix-up with his friend, scientist and madcap inventor Doc Brown. Poor Marty then has two problems – how to get back to the eighties with the help of Doc if they can get his DeLorean time machine to work once more and how to get his parents to fall in love, or run the risk of not existing at all.

Back to the Future, London Cast & Creatives

The creative team includes Tony Award-winning John Rando as director, with score by Grammy winners – legendary film composer Alan Silvestri and Glen Ballard (Ghost The Musical), along with hit songs from the feature film. Bob Gale, original writer along with Robert Zemeckis of the feature film, completes the team.

Back to the Future tickets are Up for Grabs Now!

Come along for the ride, get your tickets for the Back the Future musical now and enjoy the antics of Marty and Doc, in a production that’s a love letter to Americana, music from the ‘60s and ‘80s and a huge dose of family fun within the space-time continuum.

A near-seamless slice of escapist entertainment

Must-see nostalgia trip for fans of the original film

The kids are gonna love it

The show blazes its way onto the Strand

Crowd-pleasing show which will go down well with families

For many fans of the movie, the show will provide all the familiar ingredients they hoped for

Great Scott! The DeLorean is amazing, but this bombastic musical of the classic film is A Lot

The car’s the star 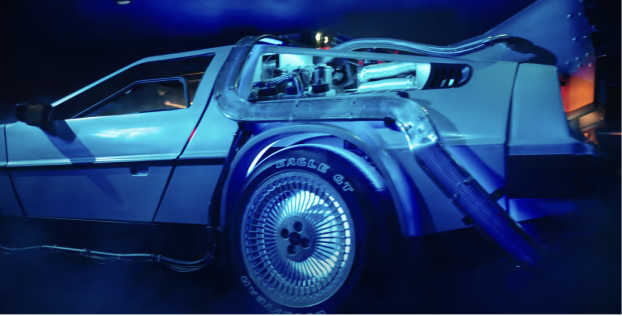